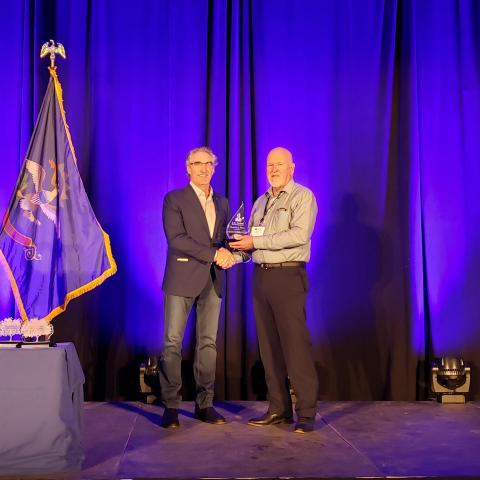 The prestigious award, which recognizes an outstanding state regulator, is named for E.W. Marland, the former Oklahoma governor who led in chartering the compact in 1935. IOGCC’s current chair, North Dakota Governor Doug Burgum, presented the award to Fitch for his many years of dedicated service in support of IOGCC’s mission.

Fitch served as Director of the Oil, Gas and Minerals Division for the Michigan Department of Environmental Quality from 1996 until he retired in April of 2019. In 2011, Fitch was appointed by Michigan Governor Rick Snyder to serve as the state’s Official Representative to IOGCC, and he remained in that role until his retirement. He also completed terms on various IOGCC committees, including the Steering Committee, Resolutions Committee, and Environment and Safety Committee.

After his retirement from Michigan’s Department of Environmental Quality, Fitch went on to start his own consulting firm, H.R. Fitch Consulting Services, where he uses his 40 years of state government experience to assist his clients with government affairs issues. He is currently assisting IOGCC with an update of its publications on state regulations concerning idle and orphan oil and gas wells.